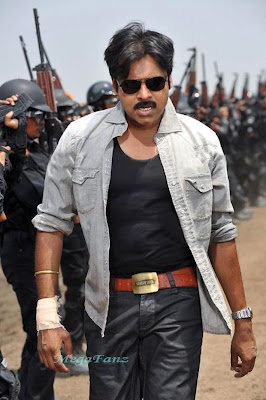 Pawan Kalyan’s Gabbar Singh is doing phenomenal business across all centres in Andhra Pradesh and other markets. We have received exclusive information that the film has collected a share of Rs 2.05 crores in Nizam alone on the first day of its release. In Nizam, Gabbar Singh is being screened in 235 screens and going by the strong word of mouth about the film, there’s no stopping this juggernaut. Harish Shankar has directed the film and it stars Pawan Kalyan, Shruti Haasan, Abhimanyu Singh in lead roles. Ganesh Babu produced the film and Devi Sri Prasad composed the music. Pawan Kalyan’s energetic performance and dialogues stood out as the main highlights of the film.

Power Star Pawan has taken Uttarandhra by storm with his action Entertainer ‘Gabbar Singh’. The movie has delivered a sterling day 1 performance in both these territories and here are the figures(Shares).

These numbers are phenomenal and the movie is expected to continue its strong run in these areas.
Posted by pa1fan