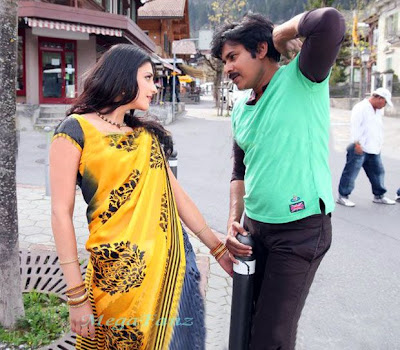 The movie runs completely in CMYK mode (CMYK is the color mode in which the total movie highlights with 4 basic colors Cyan, Magenta, Yellow, Key(black) we have movies like Yama Donga, Magadheera in this format).

Pawan Kalyan entrance is made with a mighty fight which was composed by Ram-Laxman in funny manner. Later the scene shifts to the Rajasthan desert locations with army men having guns and missiles along with them.Getting into the flashback episodes the Harish Shankar added some dose over these scenes.

The flashback was made to run more than 7 minutes to elevate the relationship between the mother and son.Sruthi Hassan is pretty and looks gorgeous in sarees. Her acting like an innocent village girl is good and Kota Srinivasa Rao is best upto his mark as heroine’s father.

First half is around one hour which runs with fast pace without boring. The first half of the movie will be the best ever for our fans.Interval fight at railway station is good.Coming to second half the movie gets into some emotional scenes and gets slow down as the depth in the story is being evaluated.

Dil se song is picturised in romantic way after the marriage of the lead roles in the movie.Ajay is superb as Pawankalyan’s brother and this movie is going to be the one of the milestone for his career. Gayatri (Happy Days fame Appu) is the lady love of the Ajay.

Kevv Keka song gets into peaks as Pawan Kalyan enters the screen from the second half of the screen. Pawan dance is superb with slow motion steps.

Climax is going to be one of the best among the movie of Pawan Kalyan.It is the another highlight of the movie.

The movie is completely is fast paced movie with dynamic screen-play. So, it would be main plus point of the movie.
No, doubt Pawan kalyan rocked his way with his mark of action and comedy.Sruthi Hassan is good.

Abhimanyu Singh crossed the action limitations of Sonu Sood he is one of the best part of GabbarSingh.Last but not the least Harish Shankar and Devi Sri Prasad should be awarded as the best Powerstar fans of the decade for their dedication for the movie.

Final Word :Finally, GabbarSingh will live up to the expectations. Its completely an entertainer for both the families and mass audience. So, Get ready...


This Summer is Mega Summer
Posted by pa1fan